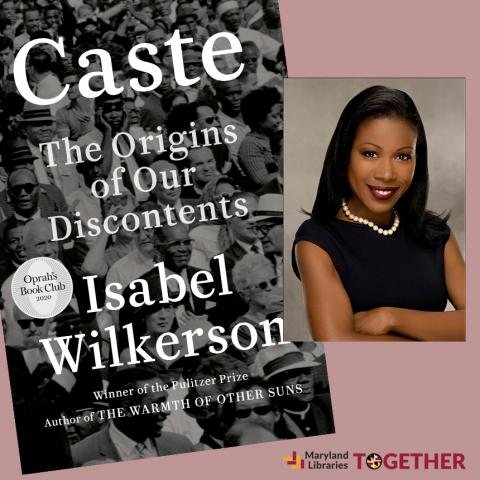 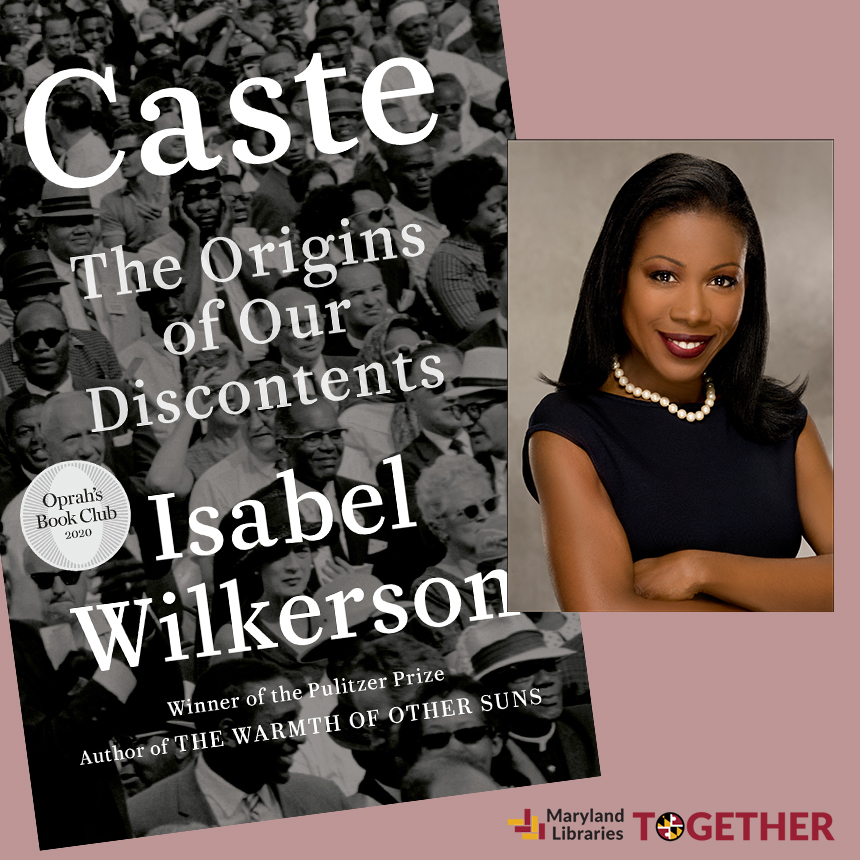 Due to high interest, all the spots for this virtual event are filled and the waitlist is full. If you registered but are no longer able to attend, please cancel your registration so that someone from the waiting list may join the event. Please note that you only need one login per computer, so if more than one person in your household has registered, please cancel the duplicate registrations and watch together. A cancelation link can be found in your confirmation email, or email askhcls@hclibrary.org for assistance.

Isabel Wilkerson discusses her critically acclaimed book Caste: The Origins of Our Discontents.

In this brilliant book, Wilkerson gives us a masterful portrait of an unseen phenomenon in America as she explores, through an immersive, deeply researched narrative and stories about real people, how America today and throughout its history has been shaped by a hidden caste system, a rigid hierarchy of human rankings.

Sponsored by Friends & Foundation of Howard County Library System and Maryland Libraries Together, a collaboration of Maryland Libraries to engage communities in enriching educational experiences that advance an understanding of the issues of our time. This project is supported in part by the Institute of Museum and Library Services through the Library Services and Technology Act Administered by the Maryland State Library.

Copies of Caste available to borrow from HCLS or purchase a copy from Books with a Past.

For more information on this Speaker please visit prhspeakers.com.

Please register with an email address to receive an immediate registration confirmation. You will receive a second email 24 hours prior to the start of the event with the information to join by computer, tablet, or phone.

ABOUT ISABEL WILKERSON
Isabel Wilkerson, winner of the Pulitzer Prize and the National Humanities Medal, is the author of The New York Times bestsellers The Warmth of Other Suns and Caste: The Origins of Our Discontents. A gifted storyteller, Wilkerson captivates audiences with the universal human story of migration and reinvention, as well as the unseen hierarchies that have divided us as a nation, in order to find a way to transcend them.

She has become an impassioned voice for demonstrating how history can help us understand ourselves, our country and our current era of upheaval. In her writing, Wilkerson brings the invisible and the marginalized into the light and into our hearts. In her lectures, she explores with authority the need to reconcile America’s karmic racial inheritance — a notion she has expressed in her widely-shared Op-Ed essays in The New York Times.

Wilkerson captivates audiences with the universal story of migration and the enduring search for the American dream, the origins of our shared commonality. She draws a direct link between the leaderless revolution known as the Great Migration and the protest movements for social justice today, both of them responses to unacknowledged and unaddressed history.

The Warmth of Other Suns tells the true story of three people among the six million who made the decision of their lives during the Great Migration, a watershed in American history. Wilkerson spent 15 years working on Warmth, interviewing more than 1,200 people to tell what she calls one of the greatest underreported stories of the 20th Century. In addition to the National Book Critics Circle Award, the book won the Heartland Prize for Nonfiction, the Anisfield-Wolf Award for Nonfiction, the Lynton History Prize from Harvard and Columbia universities, and the Stephen Ambrose Oral History Prize and was shortlisted for both the Pen-Galbraith Literary Award and the Dayton Literary Peace Prize. The Warmth of Other Suns became a New York Times and national bestseller. It was named to more than 30 Best of the Year lists, including The New York Times’ 10 Best Books of the Year, Amazon’s 5 Best Books of the Year, and Best of the Year lists in The New Yorker, The Los Angeles Times and The Washington Post, among others. It made national news when President Obama chose the book for summer reading in 2011. In 2012, The New York Times Magazine named The Warmth of Other Suns to its list of the best nonfiction books of all time, and in 2019, TIME Magazine named it one of the “10 Best Non-Fiction Books” of the decade.

Her latest book, Caste: The Origins of our Discontents, published in August 2020 to critical acclaim, with Dwight Garner of The New York Times calling it, “An instant American classic” and Oprah choosing it for her monthly book club pick. Picked as a Time’s 2020 must-read book, the book examines the unspoken caste system that has shaped America and shows how a hierarchy of social divisions still defines our lives today. Wilkerson brings the past’s complexities to vivid life through her passionate research and her profound gift for connecting with audiences of all backgrounds. Caste is being adapted into a Netflix film directed, written, and produced by Ava DuVernay.

She has lectured on narrative nonfiction at the Nieman Foundation at Harvard University and has taught at Princeton, Emory and Boston universities. She has lectured at more than 200 other colleges and universities across the United States, Europe and in Asia. Her work has garnered seven honorary degrees, most recently from Bates College and Southern Methodist University. She has appeared on national programs such as CBS’s 60 Minutes, NPR’s Fresh Air, NBC’s Nightly News, MSNBC, CNN, C-SPAN, and others.

In conferring Wilkerson the 2015 National Humanities Medal, the National Endowment for the Humanities honored her “for championing the stories of an unsung history. Her masterful combination of intimate human narratives with broader societal trends allows us to measure the epic migration of a people by its vast impact on our Nation and on each individual life.”