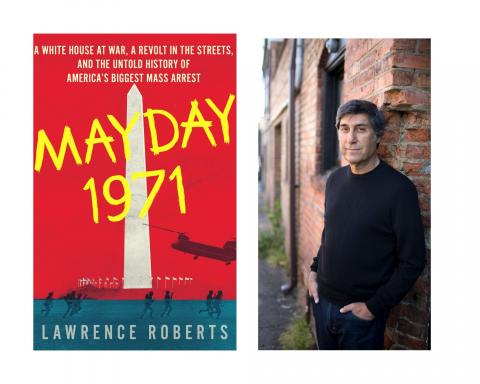 Ages 18+ (Adults)
Registration for this event is no longer open.

MAYDAY 1971 is the ultimately inspiring story of a season when our democracy faced grave danger, and survived.

A bomb blast inside the U.S. Capitol. Embittered soldiers hurling back their combat medals. A mass march engulfing Washington. Twelve thousand people swept up in America’s biggest dragnet. This is the story behind the extraordinary final clash between the Vietnam antiwar movement and President Richard Nixon.

Washington journalist Lawrence Roberts, drawing on dozens of interviews, unexplored archives, and newfound White House transcripts, recreates these largely forgotten events through the eyes of dueling characters. Woven into the story too are now-familiar names including John Kerry, Jane Fonda, and Daniel Ellsberg, leaker of the Pentagon Papers.

Lawrence Roberts has been an editor of investigative journalism for most of his career. He’s worked at ProPublica, the Washington Post, Bloomberg News, and the Hartford Courant, and was executive editor of the Huffington Post Investigative Fund. He was a leader on teams honored with three Pulitzer Prizes.

“A brilliant investigation of the tense days when war, democracy and law collided on the streets of Washington, Mayday 1971 brings it all back in vivid detail and riveting story-telling. Here is a real-life thriller that shows the strength of our society and our system, important lessons for today’s turmoil.”

Please register with an email address to receive an immediate registration confirmation. You will receive the link to the event in your confirmation email.

Presenter: Lawrence Roberts
Back To Top