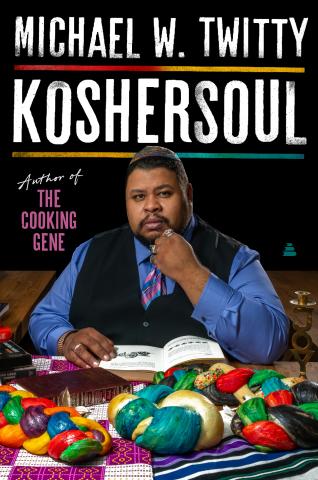 In KOSHERSOUL, Michael Twitty, James Beard award-winning author of the acclaimed The Cooking Gene, explores the cultural crossroads of Jewish and African diaspora cuisine and issues of memory, identity, and food.

Michael examines the creation of African/Jewish global food as a conversation of migrations, a dialogue of diasporas and rich background for intimate and probing recipes for the people who create it. At the same time, he shares recipes for Southern culinary touchstones like apple barbecue sauce, watermelon and feta salad, and collard green lasagna, while blending the traditions of his mixed identity into new creations such as Louisiana style latkes and kush. KOSHERSOUL is not just a recipe book, but an exploration of selfhood when born at a crossroads of race.

The question here is not just who makes the food and who it belongs to, but how the food makes the people, reflecting the journey, and validating the existence of these marginalized identities. Twitty aims to move our vision beyond the idea of Jews of Color as outliers, but as significant and meaningful cultural creators in both Black and Jewish civilizations.

Michael W. Twitty is the author of The Cooking Gene, winner of the James Beard award for writing about food and the Book of the Year. He is a highly sought after speaker and consultant (Colonial Williamsburg), and a member of three speaker’s bureaus.

He has appeared on programs with Andrew Zimmern (Bizzare Foods America), Henry Louis Gates (Many Rivers to Cross), Padma Lakshmi (Taste the Nation) and most recently on Michelle Obama's Waffles and Mochi.

He is a TED Fellow and was just named as a National Geographic Emerging Explorer. His first MasterClass course, “Tracing Your Roots Through Food,” is now available. Over the past year he has partnered with Atlas Obscura to teach multiple online seminars and was the first guest on a new web series for their food division, Gastro Obscura. Michael will also be a Consulting Producer on a new food competition program coming soon from OWN, and his line of personal spice blends with the boutique supplier Spice Tribe regularly sells out. He lives in Fredericksburg, Virginia.

This event is in Partnership with Jewish Federation of Howard County and the Baltimore Jewish Council. We thank you for your support.